q. Vidur was son of a servant but became a Brahmin and minister of Hastinapur empire.

Just Leela. For the story you have to look at the final outcome and if it a net positive...which it is. Take Mahabharat - Ma Ganga drowned her 7 children and let the 8th one live only when King Shantanu protested....what does it mean. Are you going to only look at that instance or consider the entire arc of the MbH. My suggestion go to the source and read that in full i.e, till the story's conclusion.
Similarly, King Jarasandha wanted to sacrifice 100 kings of India to become invincible...cleary it was supposed to work. Lord Krishna had King Jarasandha mangled at the hands of Bheem to prevent that sacrifice and stop him from being invincible.

Vivek Arya Vedas tells about Shunshep in its mantra. Vedas are not history book. Its grossly misinterpreted. Raja Harishchandra was a noble king famous for his truth speaking. In middle ages Vedas were wrongly interpretated and those mantra talking about Shunshep was associated with Raja Harishchandra. We reject such misinterpetations and follow only true interpretations of Vedas

Now Let us have some look at some Jain scriptures-

“The Jains are strictly prohibited to 1) praise a person belonging to another religion or to talk of his good qualities, 2) to salute him, 3) to talk much to him, 4) to talk to him frequently, 5) to bestow upon him food and clothes, 6) to supply odoriferous substances and flowers to enable him to worship his idol.” Jain scripture Vivekasâra, p.121

Let the wise consider with what feelings of hatred and hostility the Jainees are actuated in their relations with those who profess a religion different from theirs. Jain teachers teach: “Just as a ruby, which is embedded in the head of a venomous snake, should not be sought after; even so it behooves the Jainees to shun the company of a non- Jainee, no matter how virtuous and learned he is.” Jain scripture Prakaraa Ratnâkara 2:29

It is clear, therefore, Jain sectarian

is more biased.Similar quotations to the same effect include: “Let not the Jainees even look at those that are opposed to the Jain religion.”Jain scripture Prakaraa Ratnâkara 2:29
But, Vedas/ Upanishads/ Gita...have never told anything like that simply because they are among the ranks of earliest scriptures written for the obvious reason that there were no other scriptures written & we all know obviously it is the OLDEST DHARMA - SANATAN DHARMA.

Now if we go to Medeival times we have something to compare Eg: we find something written by Dr. Usha Sivapriya, before duly quoting classical Tamil sources, arguing that the literatures posterior to Manikkavasaghar (an ancient Tamil sage, author of Thiruvasagham) “had plenty of reference to the nature, torture and terrorism of Jaina missionaries and rulers in Tamil kingdom”. It all started with the invasion by Kharavela, king of Kalinga, at the turn of the Christian era: “Kharavela defeated the Tamil kings headed by Pandiyans and captured Madhurai. The Kalinga or Vadugha king enforced Jaina rule in Tamil kingdom. People were forcibly converted at knifepoint, temples were demolished
or locked down, devotees were

tortured and killed.” And it continued intermittently for centuries under Pandya and Pallava rule: “When the Digambara Jaina missionaries had failed in converting the masses, they tried to torture and kill them. (…) After failing in the attempt of converting Pandiyans the "Digambara Jains" tried to kill the Pandiyan Kings through various means, by sending a dangerous snake, wild bull and mad elephant.”

Another writer Dr. Sivapriya links the advent of Digambar-Jainis in Tamil Nadu with an episode of conquest by non-Tamils.

Further another writer, Sita Ram Goel points out that she omits crucial details in his writings: that this king, Arikesari Parankusa Maravarman, is also described as having first persecuted Shaivas, when he himself was a Jain; that Sambandar vanquished the Jainas not in battle but in debate, which was the occasion for the king to convert from Jainism to Shaivism (wagers in which the second or a third party promises to convert if you win the debate are not uncommon in India’s religious literature); and that Sambandar had escaped Jain attempts to kill him.

Thus no wonder, certain terroristic traits in Medieval period of some Jain sect can be found even today by providing a link from an Islamic blog!!!

The Jains (Vanias) are the most violent
people under the umbrela of their so
called "Ahinsa" in the shadow of their
SATHHIYO - the Swastika and the
feigned tenet of being vegetarians.
Reknowned psychoterrorists, black
marketeers, without a trace of the
feeling of pitty in them. Money is

their God. Not Mahavir.

Avanish Govekar Kerala has a high case of violence towards wild animals in Malapuram.

Menka Jadhav Yasmintsarvaani bhutaanyaatmaivaabhuudvijaanatah
Tatra ko mohah kah shokah ekatvamanupasyatah
- Yajurveda 40.7
"Those who see all beings as souls do not feel infatuation or anguish at their sight, for they experience oneness with them."
Breehimattam yavamattamatho maashamatho tilam
Esha vaam bhaago nihito ratnadheyaaya dantau
maa hinsishtam pitaram maataram cha
- Atharvaveda 6.140.2
"O teeth! You eat rice, you eat barley, you eat gram and you eat sesame. These are specifically meant for you. Do not kill those who are capable of being fathers and mothers."
Another mantra in Atharvaveda says, "It is definitely a great sin to kill innocents. Do not kill our cows, horses and people."
One can identify how much are the cows revered in Vedas, Samihitas, Hinduism as whole :
https://www.dakshinvrindavan.org/cow-in-vedas/
vs see how much Jains tell about cows
http://www.dakshinvrindavan.org/cows-in-jainism/
Bottom line is BAAP BAAP hota hai, BETA beta hi rahega 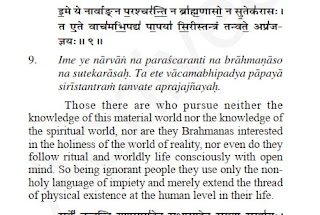 Ok I have other question about tantra. According to what I have heard the word "tantra" appears in the Rig Veda (10.71.9) and refers to "warp (weaving)", and remember tantrics say that they used tantra to create the Veda. But when I look up this scripture it seems to say that spiritually immobile persons used tantra to grow closer to the god Vak (speak) but this was a sinful way of doing this. Am I reading this wrong?
'Those men who step not back and move not forward, nor Brahmans nor preparers of libations, Having attained to Vāk in sinful fashion spin out their thread in ignorance like spinsters." - Rig Veda 10.71.9

Hindu Politics
https://www.amazon.in/Hindu-Polity-Constitutional-History-India/dp/817084312X?fbclid=IwAR0fWdTozJYNhhy07Q9vu8BJTuNbOmrbQY5Ck7KLGjB-BJJAKMzHQIKTFN4
Posted by Just Another Hindu at 1:08 PM

Just Another Hindu
Hi, I am Vincent Bruno, American Hindu and Activist. Click on my profile to see my other blogs ॐ. - CONTACT ME: JustAnotherHindu@gmail.com